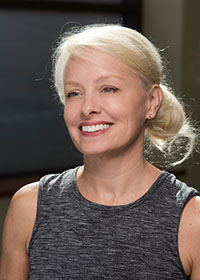 Susan Shields is the recipient of the 2006 Choo-San Goh Award for Choreography, has created dances for numerous professional companies and universities. Her work appears in the repertoires of Ballet West, Pittsburgh Ballet Theatre, Washington Ballet, Richmond Ballet, Nashville Ballet, American Repertory Ballet, The Juilliard Ensemble, Boston Ballet II, and City Dance Ensemble. She has created work for George Mason, Harvard, the University of Richmond and Shenandoah University.  In 2005, Shields was given a commission from the Wolf Trap Foundation for the Performing Arts to create a ballet for Pittsburgh Ballet Theatre, which premiered at the Filene Center that summer. She has performed nationally and internationally, most recently as a member of Mikhail Baryshnikov’s White Oak Dance Project. In addition to performing the works of numerous contemporary choreographers, she was partnered by Baryshnikov in Mark Morris’ acclaimed dance, The Argument. She was a member of the Lar Lubovitch Dance Company for eight years, performing a substantial part of his repertory. She performed with the Mark Morris Dance Group in The Hard Nut, and has performed with Laura Dean Dancers and Musicians, Eliot Feld Ballet New York and the Washington Ballet, where she received her training. Shields has taught at universities throughout the world. She served as a trustee on the board of Dance USA for several years. She has a BA in Philosophy from SUNY Empire State, an M.F.A from George Mason University and was the Director of George Mason School of Dance for 7 years.