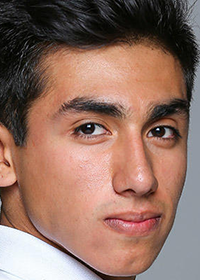 I am Carlos Martinez from Guadalajara, Mexico. At the age of 10, I began my dance studies at "Escuela de Artes" in Guadalajara, Mexico with Javier Zavala, Michelle Monreal, Diana Garcia, and Nazira Yakuboba. At the age of 13, I was awarded a major scholarship at the "National Ballet Competition of Mexico" to attend Idyllwild Arts Academy in Idyllwild, California. I joined Idyllwild Arts Academy in the Fall of 2014, where I trained with Patrick Frantz, Jonathan Sharp, Ellen Rosa-Taylor, Hai Cohen, Stephanie Gilliland and Lauren Smith. Upon graduation, I joined the freshman class at George Mason University School of Dance in the fall of 2018. Some of the choreographers and companies I have had the pleasure of working with previously to attending George Mason are Alexandre Munz, John Pennignton, Ballet de Jalisco, BodyTraffic, California Dance Theater, Inland Pacific Ballet, and Parsons Dance. Since being at George Mason University I have had the opportunity to work with Alexander Hille and Pier Loup in Kosmos by Andonis Foniadakis, Jean Emile in Na Floresta by Nacho Duato, Fiona Jopp in Variation 10 by Rafael Bonachela, Susan Shields in Sun Lit Song, Micaela Taylor 90s Sugar Rush, and Christopher d’Amboise.