‘He’s supposed to be here’ Dance student from Mexico takes the stage at Mason. 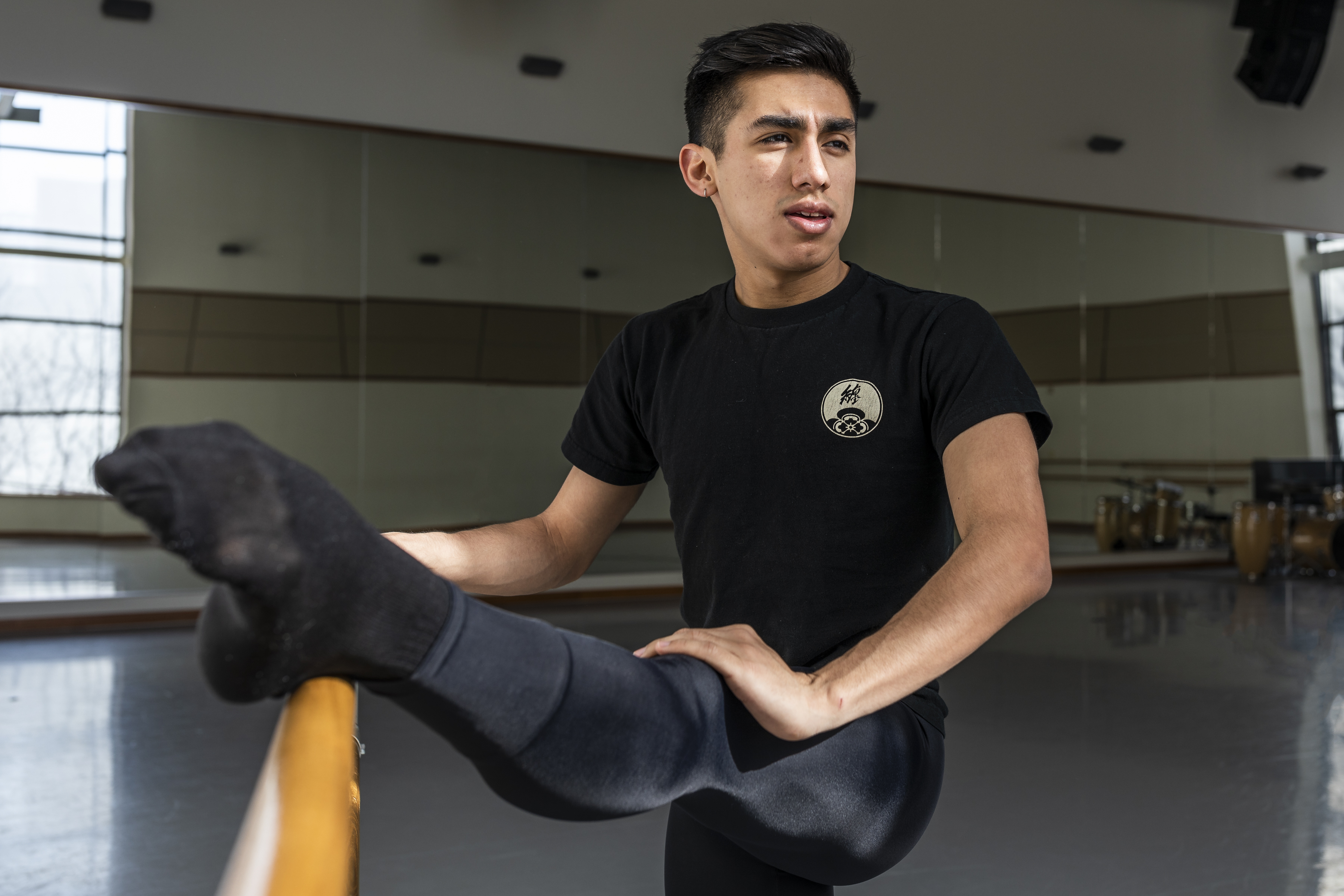 Carlos Alejandro Martinez Espinosa will soon make his debut for the first time in Virginia at the School of Dance’s annual Dance Gala Concert. Photos by Lathan Goumas.

When George Mason University student Carlos Alejandro Martinez Espinosa was a child growing up in Guadalajara, Mexico, his mom would take him to his sister’s dance classes. Not wanting to leave him home alone, his mother enrolled him in the classes along with his sister. ​

“In the beginning, I was really against it because all my friends played soccer, and that's what I wanted to do when I was a kid,” said Martinez Espinosa, now 18. “But as I kept taking classes, I started to enjoy dancing, and I saw all the things I was able to do."

After a while, he started to embrace that he was doing something different than his friends. He liked being different and he was great at it. His sister eventually quit, but Martinez Espinosa was meant to stay in the spotlight. He will soon make his debut for the first time in Virginia at the School of Dance’s annual Dance Gala Concert.

“He’s supposed to be here,” said Susan Shields, director of the School of Dance, who handpicked Martinez Espinosa to be in the 2018 freshman class at the school, a spot granted to few dancers.

Martinez Espinosa’s talents have impressed everyone who has seen him dance. After attending the state art school in Mexico, he caught the eye of the Idyllwild Arts Academy in California at the National Ballet Competition of Mexico. Idyllwild offered him a full scholarship to come study at the prestigious academy.

During Martinez Espinosa’s time at Idyllwild, Shields came to stage a performance. Idyllwild is one of the few schools Shields travels to every year to teach and look for up-and-coming talent to fill some of the School of Dance’s coveted 20 freshman class spots.

She cast him in the performance. In addition to his dancing, she was impressed by his personality, humility and humor. She later offered him a scholarship to study at Mason.

“It's rare, as the director, that I pick without the approval of the faculty,” said Shields, adding that Martinez Espinosa was an exception. But upon seeing his talent, the school’s faculty quickly approved. ​

Martinez Espinosa agreed to the offer. He said he has been reassured to see how dedicated and caring the faculty are and said he feels that his dancing has already improved greatly. In his busy, intensive schedule of dance classes and academics, he is preparing for his big performance at the gala, an event that helps fund scholarships like the one that he received.

The gala will feature dances from three guest choreographers: internationally known Spanish modern ballet dancer and artistic director of the Berlin State Ballet, Nacho Duato; Greek choreographer Andonis Foniadakis, who will have the first American performance of his piece at Mason; and Lucinda Childs, an American postmodern dancer and actress.

"This isn't your local dance studio down the street, with all due respect," said Shields. "This is a national program. You can come here and see high-level choreography and dancing."

The gala will be at the Center for the Arts on Friday, March 29, and Saturday, March 30, at 8 p.m., and at the Hylton Performing Arts Center on Sunday, March 31, at 4 p.m. More information and tickets can be found on the School of Dance’s website.